LSAC also working with Microsoft on a wide range of projects to use data and digital technology to improve access, efficiency, and affordability of legal education 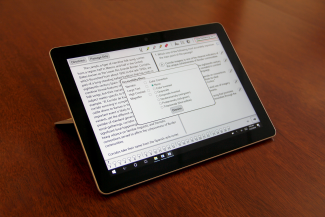 The Law School Admission Council today announced a broad technology collaboration with Microsoft Corp. that will include the use of thousands of Microsoft Surface Go tablets as the LSAT exam transitions to a digital format beginning with the July 2019 LSAT test.

Beyond the Digital LSAT on the Surface Go, LSAC and Microsoft are working together on a range of initiatives designed to make the law school admission process more effective and efficient.

“Legal education and the legal profession need to keep pace with technological advancements,” said Kellye Testy, president and CEO of LSAC. “With the breadth of their solutions and their commitment to privacy, security, accessibility, and inclusion, Microsoft will be a tremendous help to the legal education community as we navigate these accelerating changes.”

“There are clear and profound opportunities for the legal profession to use data and digital technology to support its timeless and important role in society,” said Brad Smith, president of Microsoft. “Microsoft is excited to partner with the LSAC on its digital transformation.”

The LSAT exam is used by more than 99 percent of law school applicants and is the only assessment tool accepted by every law school in the United States and Canada. In the 2017–2018 testing cycle, over 129,000 LSAT examinations were administered. LSAC has more than doubled the number of test administrations it will offer in the 2019–2020 cycle, compared to the 2017–2018 cycle.

To facilitate the transition to the Digital LSAT starting July 2019, LSAC is procuring thousands of Surface Go tablets that will be loaded with custom software and locked down to ensure the integrity of the exam process and security of the test results. 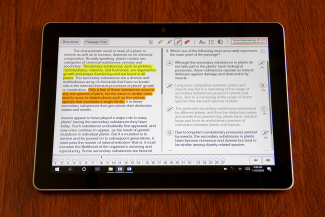 “Microsoft’s leadership on accessibility was one of the reasons LSAC selected the Surface Go as the tablet for the Digital LSAT,” said Troy Lowry, senior vice president of technology products and chief information officer at LSAC. “Surface Go is a great device, and it includes Windows 10 capabilities like a built-in screen reader, text and icon magnifier, and many other accessibility features. LSAC and Microsoft are working together to ensure the Digital LSAT on Surface Go provides a wide range of accessibility features and functionality for test takers who need them.”

The Surface Go kickstand will allow test-takers to adjust the angle of the screen from almost flat on the table to close to 90 degrees. This will help ensure that test takers have a comfortable and effective reading experience under a wide range of desk and lighting conditions at over 600 testing centers across the US and Canada.

“LSAC has been working on Digital LSAT delivery with Microsoft for many months, and we are confident that test takers will have a very positive experience with the Digital LSAT on Microsoft Surface Go,” said Lowry.

In addition to its collaboration with Microsoft on the Digital LSAT and other initiatives, LSAC also announced today that it plans to separate the writing section of the LSAT from the other portions of the test, which are multiple-choice sections designed to assess logical reasoning, analytical reasoning, and reading comprehension.

Currently, every LSAT administration includes a 35-minute writing section that follows the multiple-choice sections. Starting with the June 2019 LSAT administration, the writing sample will be separated from the LSAT and administered on a secure online platform. This change will result in several benefits for test takers, including shortening the testing day, allowing candidates to type their essays on a keyboard, instead of writing it by hand, and making it possible for test takers to complete their essay at a time and place of their choosing. In addition, candidates who take the LSAT more than once will not have to complete an essay each time they take the test.

“We’re responding to feedback from test takers that having to complete a written essay in a large-group setting at the end of a rigorous examination is not conducive to doing their best writing,” said Lily Knezevich, senior vice president for learning and assessment at LSAC. “This new approach will provide test takers more options for how and when they generate their writing sample, while maintaining the integrity and security of the process.”

“We know that many schools value the LSAT writing sample in making their admission decisions, because it is the only essay an applicant submits that is written under standardized, proctored conditions and in response to a prompt specifically designed to capture the kind of persuasive argumentation required in law school,” Knezevich said.

About the Digital LSAT

LSAC announced on October 3, 2018, that it would be transitioning to a Digital LSAT starting with the July 15, 2019, test, after this year’s law school admission cycle is largely completed. The structure of the test sections and test questions will not be any different than the paper-and-pencil LSAT. For the July 2019 test, some test takers will be assigned pencil-and-paper tests, and some will be assigned digital tests, which is a best practice under educational testing standards to assure that there is no statistical advantage between the formats.

Learn more about the Digital LSAT