Can we diversify the law school pipeline? Yes, we “Khan.”

Last June, the Law School Admission Council and Khan Academy unveiled an ambitious—maybe even audacious—joint venture to offer free online LSAT prep to prospective law school students. The goal was simple, but profound. We wanted to expand and diversify the pool of people who were considering a career in law and advocacy by making it easier and more affordable for people to prepare for the Law School Admission Test, the gold standard assessment that is a critical first step for virtually every candidate applying to law school.

We’re proud to announce new survey data that shows that African Americans, women, and economically disadvantaged students are among the heaviest users of Khan Academy Official LSAT Prep. The swift growth in people using this free resource has been just as encouraging. In less than a year since the launch, we are now seeing an average of 40,000 users of Khan Academy Official LSAT Prep per month.

Starting with the June LSAT, first-time test takers were asked whether they had used the new Khan Academy Official LSAT Prep to prepare for the exam. In June, just two months after the release of the beta version, we were pleasantly surprised and excited to see that nearly a quarter of the respondents said they had accessed the free Khan Academy Prep to study for their exam. By the July LSAT, the percentage was up to 32%. By September, it was up to 33%. And by the November LSAT, the most recent test for which we have data, 44% of respondents said they had used it. 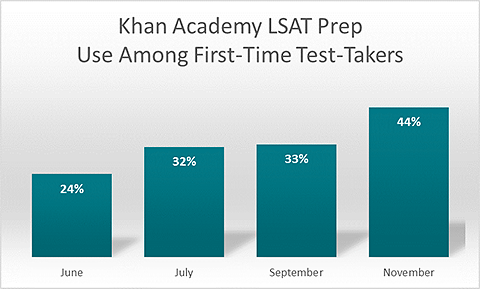 And when we started digging into the numbers, we got even more excited. Based on the early data from the first four LSATs, the free, high-quality test preparation resources from Khan Academy and LSAC are seeing particularly high use among women and students from underrepresented minority groups.

Based on our survey1 of candidates who took the LSAT for the first time in November 2018, we found the following:

We hope this is the beginning of a new and exciting trend. One of our top goals is to expand and diversify the pipeline of candidates who can see themselves pursuing a career in law and advocacy. Providing the right tools and resources to attract more women and minority students to law school is a critical part of a broader effort to create a legal profession that truly reflects the full diversity of our society.

Based on responses to surveys of all first-time LSAT test takers between June and November 2018, students from disadvantaged economic backgrounds are recognizing the benefits and opportunity of our Khan Academy Official LSAT Prep. Students who rated their family income as “below average” or “far below average” compared to other members of their communities had the greatest proportion of test takers who prepared using the free LSAT prep. 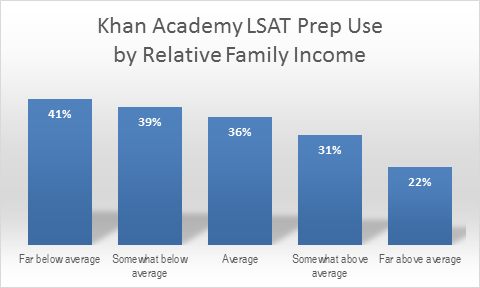 Another huge issue we wanted to help address with free LSAT Prep was the burden of student debt, which affects so many young people today and can have a chilling effect on their educational and career choices. It’s hard to envision spending hundreds or even thousands of dollars for commercial test preparation services when you’re already saddled with huge student loan debt. So, we hoped that free, high-quality, individualized LSAT prep through Khan Academy in collaboration with LSAC could be a game changer for many students. So far, survey response data appears to support our hypothesis. In general, the survey responses indicate that the higher the level of student debt a candidate has, the more likely they are to use Khan. For example, for respondents who reported some undergraduate debt up to $39,999, about 37% of them reported preparing with our free Khan Academy Official LSAT Prep. For respondents who reported $40,000 or more in debt, the number was even higher—41% reported using it. 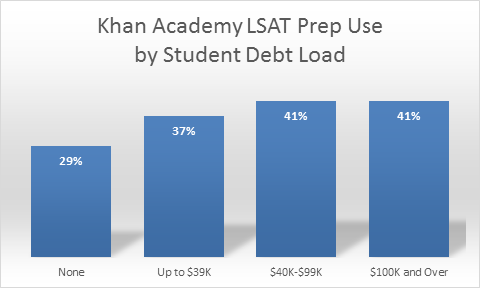 While the survey results reflect use of the free LSAT Prep among first-time LSAT test takers, prevalence among candidates taking the LSAT for the second or third time is somewhat lower, as we expected. Khan Academy LSAT Prep wasn’t available when many of those candidates started to study and prepare for the LSAT. But even among all LSAT test takers, we see a similar pattern of an increasing trend toward using Official LSAT Prep to prepare for the LSAT.

This has truly been a groundbreaking partnership. In less than a year, our investment in free, high-quality online LSAT prep resources and tools is helping thousands of students—particularly women, minority students, and economically disadvantaged students—get the practice and individualized help they need to demonstrate their full capabilities on the LSAT and pursue a career in law.

It’s amazing to realize that 40,000 students are using our free online LSAT Prep tools and resources every month. And we know that behind every number and every data point, there is a real person. It’s gratifying to know these tools and resources are expanding opportunity for all.

If you or someone you know is considering a career in law, please let them know about our free online Khan Academy Official LSAT Prep resources.

1Based on the November Post-LSAT Questionnaire, which was completed by 7,450 first-time LSAT takers of the November 2018 LSAT, for a survey response rate of 38.2%.

Vice President of Marketing and Strategic Partnerships at Khan Academy

Catherine Wang is vice president of marketing and strategic partnerships at Khan Academy, where she leads the team responsible for expanding the academy’s reach via partnerships, including working with school districts and teachers to integrate Khan Academy into the school curriculum.

Lily Knezevich is the senior vice president for learning and assessment at the Law School Admission Council. She earned her BA from New York University, majoring in mathematics and philosophy, and her MA in philosophy from the University of Pittsburgh.

Plot Twist: How One Law School Graduate Used Her Degree to Open Doors in Hollywood
How One Student’s Passion for Law Was Amplified by the LSAC PLUS Program
Diversity, Equity, and Inclusion Updates and Resources to Help Candidates Navigate Law School Admission
How LGBTQIA+ Law Students Are Navigating Through COVID-19
How Recent Supreme Court Decisions Affect Legal Education