Dean Testy, a nationally and internationally known advocate for access and diversity in the law, brings vision and operational experience to LSAC’s mission of ensuring student success and high-quality legal education. 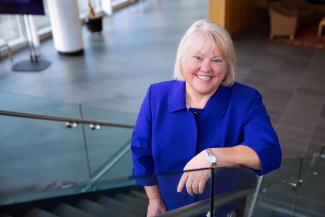 Kellye Y. Testy, Dean of the University of Washington School of Law in Seattle, has been named the new President and CEO of the Law School Admission Council (LSAC).

Testy brings substantial experience as a law school dean and business leader to her new post, along with effective partnerships throughout legal education, including with the American Bar Association (ABA) and the Association of American Law Schools (AALS) for which she served as President in 2016.

“I am honored to assume the role of President and CEO of LSAC, an organization whose sole mission is to serve law schools, law students, and legal education,” Testy said.

LSAC Board of Trustees Chair Susan L. Krinsky announced the appointment: “Dean Testy’s enthusiasm for LSAC’s mission is clear, and her commitment to diversity and access to legal education is inspiring. We believe Dean Testy’s experience and commitment are perfectly suited to her new role. Her leadership in pursuit of quality legal education will allow LSAC to reach even greater heights of success in serving our member schools and their students.”

“For the rule of law to flourish, we need outstanding lawyers and that, in turn, means that the quality of legal education is paramount,” said Testy. “LSAC has long been a leader in encouraging and assisting law schools in admitting diverse classes capable of success.”

Dean Testy led the University of Washington School of Law in Seattle for eight years, hiring a new generation of outstanding faculty, significantly expanding philanthropic resources, advancing equity and inclusion, and heightening the school’s stature and visibility. National Jurist magazine recently named her the second-most influential person in legal education. A native of Bloomington, Testy received both her undergraduate and law degrees at Indiana University. She graduated summa cum laude and Order of the Coif and then clerked on the US Court of Appeals for the Seventh Circuit before joining the academy. A beloved teacher and expert in corporate law and governance, Testy has published extensively in those fields, as well as in several others.

To enhance its commitment to access and diversity, LSAC has entered an innovative partnership with the Khan Academy to develop free, online practice materials for the LSAT with the goal of making personalized, online LSAT practice free for all.  LSAC is also expanding the frequency and formats of the LSAT to reduce barriers to entry to legal education, including piloting the first nationwide digital LSAT exam on May 20, 2017.  Further, LSAC has made a significant investment in the Council on Legal Education Opportunity, Inc. (CLEO) (PDF), to assist in that organization’s efforts to advance the diversity of the legal profession.

To support its member schools’ efforts to recruit and enroll JD and LLM students who seek out legal education from ever more diverse fields and locales, LSAC is working on a significant update to ACES, its sophisticated, proprietary admissions technology platform that it provides free to its members. LSAC also operates the Credential Assembly Service (CAS) that enables students to apply efficiently to multiple schools.

LSAC will hold its Annual Meeting on May 31–June 3 in Palm Desert, California. Among dozens of panels on legal education, LSAC will present an update on its state-of-the-art testing research on the LSAT. The LSAT is the most valid, reliable, and widely used test in law school admissions.

“In a time of considerable change in the legal profession and the academy, we look forward to accelerating key partnerships, integrating technology intelligently, and serving our members in ever-more innovative and effective ways,” said Testy.

Dean Testy succeeds Daniel O. Bernstine, who passed away in September 2016. Athornia Steele, former chair of the Law School Admission Council’s Board of Trustees, has served as LSAC’s interim president during the search for a successor.