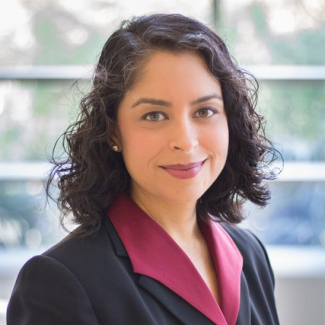 Meera E. Deo is a national expert on legal education, racial representation, and diversity, equity, and inclusion. She is also Director of the Law School Survey of Student Engagement (LSSSE)

, which houses the largest repository of law student data and is based at Indiana University-Bloomington. Before joining Southwestern Law School

, she was a tenured Professor of Law at Thomas Jefferson School of Law in San Diego and the William H. Neukom Fellows Research Chair in Diversity and Law

at the American Bar Foundation

, the first national empirical study of law faculty utilizing an intersectional framework. The book examines how race and gender affect interactions with faculty and students

In her ongoing empirical study, Pandemic Effects on Legal Academia

, Professor Deo builds on findings from the book to analyze how the global pandemic affects scholarly productivity and the career success of vulnerable faculty, including caregivers, women of color, and untenured professors. Another research trajectory traces the evolution of affirmative action jurisprudence

Professor Deo graduated from Long Beach Polytechnic High School before designing an Interdisciplinary Studies major in Comparative Cultures and earning a degree with High Honors from UC Berkeley. While a University of Michigan law student, she joined the landmark case of Grutter v. Bollinger as an Intervening-Defendant, working on the legal team as a student and attorney to support integration and affirmative action from discovery proceedings through trial, and ultimately at the U.S. Supreme Court. She practiced Civil Rights, Cyberspace, and First Amendment litigation with the ACLU National Legal Department in New York City as the William J. Brennan First Amendment Fellow. She then practiced law with a focus on policy and advocacy efforts as Director of the Breast Cancer Legal Project and Staff Attorney for Women’s Health at the California Women's Law Center in Los Angeles.

After practicing law, Professor Deo entered graduate school at UCLA to pursue a Ph.D. in Sociology. Her dissertation focused on the social capital benefits of membership in various student organizations, highlighting how peer mentorship, academic support, and a sense of belonging are critical to the success of law students from traditionally underrepresented backgrounds. The National Science Foundation (NSF), Paul & Daisy Soros Fellowship, AccessLex Institute, Wolters Kluwer, and other local and national sponsors have supported her groundbreaking research. The Coalition for Asian Pacific American Law Faculty awarded her their 2018 Eric K. Yamamoto Award for demonstrating “outstanding promise.” She was a 2019 Scholar-in-Residence at Berkeley Law’s Thelton E. Henderson Center for Social Justice. Professor Deo has served as a Senate-appointed Member of the California Commission on Access to Justice, an empirical research consultant to the ACLU of Southern California, the Law School Admission Council (LSAC), and the South Asian Network (SAN). She also has been deeply engaged in service efforts in higher education, as a Member of the Executive Committee of the Association of American Law Schools (AALS) Section on Law and the Social Sciences (multiple times as Chair), Section on Empirical Research on Legal Education and the Legal Profession, and the American Association of University Professors Litigation Committee.

Why Language Matters for Diversity, Equity, and Inclusion

How we address topics and people in everyday life affects everything and everyone around us. Simply put, language matters.
By Meera E. Deo
Meera E. Deo