As a result of the pandemic, the major undergraduate admission testing organizations canceled several administrations of their tests, and many prospective test takers were left with few if any opportunities to test. Unlike the Law School Admission Council (LSAC), these testing organizations were unable to pivot to at-home testing via remote proctoring. This lack of access to testing led many colleges to suspend the requirement for a standardized admission test for applicants this year. It’s not surprising, then, that critics of standardized tests have seized this opportunity to argue that these tests are no longer necessary.

But does all of the attention that is being paid to test-optional undergraduate admission policies have any bearing on law school admission? To answer this question, it’s important to first understand that the role that the Law School Admission Test (LSAT) plays in law school admission is quite different from the role that undergraduate admission tests play in college admissions. Table 1 compares the adjusted correlations of college applicants’ test score and high school GPA (HSGPA) with college freshman GPA, as well as the adjusted correlations of LSAT score and UGPA with first-year average (FYA, or 1L GPA) in law school.

a Adjusted for restriction of range in predictor.

Predictive validity is generally the most direct and relevant type of evidence used to support admission practices; 1L GPA is generally used as a criterion because first-year coursework is more likely to be similar across programs, and performance in the first year is highly correlated with graduation. Nevertheless, external studies have demonstrated a strong relationship between LSAT score and factors beyond 1L GPA, such as class rank at graduation and performance on the bar exam.[1]

The predictive validity of LSAT score for 1L GPA is strong (Figure 1)—undoubtedly due to the fact that the LSAT measures skills that are specifically required for success in law school. This fact is supported by several surveys of law faculty that demonstrate that the most important foundational skills for success in law school are those that are assessed on the LSAT.[2] This evidence provides a second type of validation evidence to support the use of LSAT: content validity. In short, the LSAT has content validity because the skills it assesses are those most important for law school success, and it does not test skills that are not relevant to the law school curriculum. 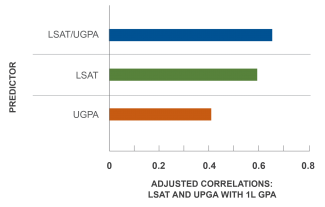 Some critics of testing have argued that tests such as the LSAT may not measure many skills required on the job or may not predict career success. There are several rebuttals to this argument. The purpose of the LSAT is to assist admission leaders by predicting success in law school, and as demonstrated in the studies described above, the LSAT is highly successful in doing so. Law school is expected to prepare its students for the practice of law; both grades earned during law school and bar exam performance are more directly relevant to success in the law profession. In fact, it would be inappropriate to use the LSAT—a test administered prior to entry into law school—as a measure of competence or skill in the practice of law for those who have not yet had any training in the law.

One reason that prior grades add less value in predicting law school success is that they correlate less well with 1L GPA (.42 adjusted correlation). There is substantial restriction of range in UGPA among law school applicants: Most applicants have high UGPAs, and thus there is less differentiation among applicants than may be the case for applicants to undergraduate programs. Stated another way, UGPAs often fall into too narrow a range to be very useful in making admission decisions.

Basing decisions primarily on grades doesn’t help differentiate among applicants when there are fewer seats available than applicants with a high UGPA. In addition, exclusive reliance on college grades as a predictor of academic success (i.e., a test-optional policy) would result in other detrimental effects:

The LSAT Should Be Used for Its Intended Purpose

Many criticisms of standardized tests are not leveled at their use for their intended purpose but are aimed instead against additional uses that were never intended or sanctioned. The same is true for the LSAT: The LSAT is intended to assist law schools in making admission decisions informed by the likelihood that the applicant will succeed in law school—most immediately, by predicting 1L GPA. Studies have also shown that LSAT score and UGPA, individually and in combination, are predictive of cumulative law school GPA to approximately the same degree as they are predictive of 1L GPA. That is, LSAT score predicts cumulative law school GPA about as well as it predicts 1L GPA; in both cases, LSAT score is superior to UGPA as a predictor. However, 1L GPA is a stronger predictor of cumulative law school grades than either LSAT score or UGPA. This fact should not be a surprise, nor is it a legitimate criticism of using LSAT scores in admission. It simply reinforces what we know to be true—viz., that LSAT score is the single best predictor of academic success in law school available to admission professionals.

Similarly, some observe that cumulative law school grades are a stronger predictor of bar exam passage than LSAT score. Again, this is not a surprising result, since the LSAT was designed to measure critical skills that were developed prior to matriculation and that are required for success in law school. It is also consistent with the intended use of the LSAT—that the test be used for admission decisions and not for predicting bar passage. What may be surprising is that LSAT score is reasonably correlated with bar passage, even though the scores are based on tests often administered four years earlier and well before students have matriculated into law school.

For more than 70 years, U.S. law schools have required the LSAT for admission. The reason is clear: Research consistently confirms that the LSAT is the single best predictor of law school success. Overall, LSAT scores provide a reliable and valid measure for law schools to use as one component of the admission process—information that cannot be adequately addressed solely by the use of college grades or other admission factors. Research reinforces the value and utility of the LSAT in finding that:

[3] We will explore this topic in depth in a forthcoming article.

Back to report gallery

Additional reports in this collection

A Foundation of Validity

Beginning with the very first notion of a standardized test for admission to law school, validity was a primary focus. In his May 17, 1945 letter to the College Entrance Examination Board (CEEB) suggesting the development of such a test, Frank H. Bowles, Director of Admissions at Columbia University, stated the seven criteria listed below.

END_OF_DOCUMENT_TOKEN_TO_BE_REPLACED

Do I Belong Here?