A Foundation of Validity

Beginning with the very first notion of a standardized test for admission to law school, validity was a primary focus. In his May 17, 1945 letter to the College Entrance Examination Board (CEEB) suggesting the development of such a test, Frank H. Bowles, Director of Admissions at Columbia University, stated the seven criteria listed below. (Note that Henry Chauncey, Director of CEEB, in his May 22, 1945 reply to Bowles, acknowledged that some of these criteria may need to be modified in order to achieve others.).

These foundational criteria demonstrate that validity (1, 2, and 5) and reliability (3) were priorities for the LSAT since its inception.

In the Fall of 1947, the first LSAT validity evaluation was carried out when a three-hour pretest was administered to first-year students at 9 law schools. Pretest performance was compared to participants’ first year grades at the conclusion of the 1947-1948 academic year. While these validity results were not available in time to guide development of the first LSAT form administered on February 28, 1948, they did guide the development of the second operational LSAT form, administered in February 1949.

Test validity continued to guide the evolution of the LSAT as law schools considering LSAT scores in their admission process shared first year performance data with LSAT validity researchers. A 1950 report describing results of a series of studies initiated in 1949 noted a correlation between LSAT scores and first year law school grades of .44 and a correlation of .52 when LSAT score was combined with a measure of previous academic success (Schrader & Olsen, 1950). These results are remarkably consistent with results currently observed. Predictive validity is only one aspect of an overall validity evaluation, and the experimental administration and subsequent evaluation of new LSAT question types was common in the early days of the test. Empirical evaluation of such question types, as evidenced by a 1949 research report on question types pretested in the fall of 1948 (French, 1949), led some to be adopted and others to be discarded. The composition of the LSAT evolved to best reflect the skills needed for success in law school.

In the mid-1970’s, LSAC President Frederick Hart assembled reports on approximately 105 LSAC-sponsored research studies from 1949 through 1983 into 4 volumes that are still referenced today. A review of the titles in those volumes further demonstrates the value placed on establishing and demonstrating the validity of the LSAT. About half of the reports, 53 to be exact, address the validity of the LSAT in some way (see Appendix A for a list of these reports). The validity research presented includes overall predictive validity, the evaluation of experimental question types, differential predictive validity for population subgroups, validity for repeat test takers, and technical aspects of validity analyses. Note that LSAC-sponsored research on the best representation of undergraduate grades in predicting law school performance were also noted but not included in the count of 53.

In 1965, LSAC (then known as the Law School Admission Test Council) made the evaluation of validity for individual law schools a priority by committing to provide this service free of charge to all member law schools. In June 1968, having carried out 128 validity studies for 97 law schools over the prior four years, the Council voted to make the validity study service permanent (see an excerpt from the memo to law schools in Appendix B). This service, now known as the LSAT Correlation Studies, is still provided today free of charge to LSAC member law schools. Participants receive a school-specific report detailing the predictive power of LSAT score and undergraduate grade point average, both individually and in combination, for predicting law school first year average. The results of the Correlation Studies are regularly summarized and published (see Summary of 2017, 2018, and 2019 LSAT Correlation Study Results (PDF)). Technical reports addressing repeat test takers and differential prediction for gender and racial/ethnic subgroups are also regularly shared (see LSAC Research Library)

Was LSAC required to demonstrate LSAT validity for the ABA?

In a review of the ABA Standards archives available on the organization’s website (Standards Archives, americanbar.org

), the first endorsement of LSAT usage in law school admission appears in 1969 as, “The Council is of opinion that LSAT, administered by Educational Testing Service of Princeton, New Jersey, should be required of all applicants for admission to the approved schools.” By the time this statement appeared, the LSAT had undergone numerous validity evaluations of various types to support its usage for this purpose. In fact, 20 of the 53 research studies mentioned above had been carried out by this time. LSAC had also permanently committed to providing free validity studies to all member law schools, having already provided this service for four years.

Validity continues to be the first priority for the LSAT as it was in Mr. Bowles letter of 1945. Annual LSAT Correlation Study participation remains high with 163 law schools having participated in the latest cycle. As mentioned above, LSAT Technical Reports on various aspects of validity are regularly made available. The skills evaluated by the LSAT were also recently validated through the 2018 Skills Analysis Study (see LSAC 2018 Skills Analysis Study: Content Validity of the LSAT (RR 19-01)).

A Word on Reliability

Unlike validity, reliability is evaluated for an individual test form and can be represented as a single statistic with a theoretical ceiling (never observed in practice) of 1.0. LSAT reliability is consistently above 0.90, indicating that the LSAT is a highly reliable test.

French, J. W. (1952). Validation of the Practical Judgment and Directed Memory Experimental Sections of One Form of the Law School Admission Test (LSAC-52-1).

French, J. W. (1953). Validation of the Study of Arguments and Vocabulary Interest Test Experimental Sections of One Form of the Law School Admission Test (LSAC-53-1).

Miller, Paul V. (1962). A Study of the Relationships Existing Among Scores on the LSAT, Writing Ability, and General Background Tests and between These Scores and Certain Other Candidate Variables (LSAC-62-1).

Pitcher, B. (1962). The Prediction of First-Year Law School Grades from Experimental Tests of Writing and Reasoning Ability and from the Law School Admission Test, 19459-1960 (LSAC-62-2).

Miller, P. V. (1963). A Repetition Study of the Relationship Existing Among Scores on the LSAT, Writing Ability, and General Background Tests and between These Scores and Other Candidate Variables (LSAC-63-3).

Schrader, W. B. & Pitcher, B. (1970). Interpreting Performance of Foreign Law Students on the Law School Admission Test and The Test of English as a Foreign Language (LSAC-70-6)

Schrader, W. B. & Pitcher, B. (1972). The Interpretation of Law School Admission Test Scores for Culturally Deprived Candidates: An extension of the 1966 Study Based on Five Additional Law Schools (LSAC-72-5).

Pitcher, B. (1973). An Exploratory Study of the Possibility of Curvilinearity on Law School Validity Study Data (LSAC-73-3).

Schrader, W. B. & Pitcher, B. (1974). Extension of the Study of the Possibility of Curvilinearity in Law School Validity Study Data (LSAC-74-7)

Powers, D. E. (1980). A Consideration of the Possibility of Differential Predictive Effectiveness of Writing Ability Scores for Minority Groups (LSAC-80-1). 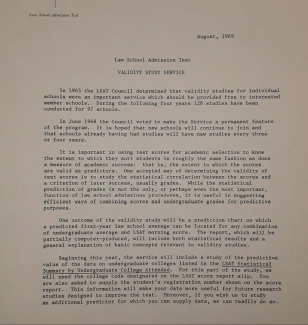 Back to report gallery

Additional reports in this collection

Do I Belong Here?

Upending “Normal”: Toward an Intersectional Approach to DEI

As paradigms change in the legal profession, from the way law is practiced to the way firms operate, we must ask ourselves a very simple question: Can we upend the “normal” way we have approached diversity, equity, and inclusion work so we can improve outcomes for individuals from marginalized identities?
END_OF_DOCUMENT_TOKEN_TO_BE_REPLACED