Leading the Charge for Equity and Inclusion: An Expanded Role for LSAC’s “Diversity Pioneer” 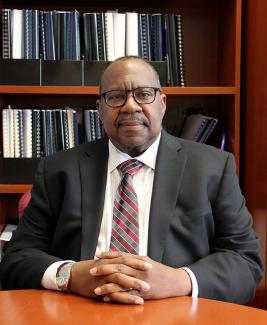 I am thrilled to announce that Kent Lollis, a longtime co-conspirator for equality and now my colleague, has agreed to serve as LSAC’s vice president and chief diversity officer. The pioneering work Kent has done directing LSAC’s diversity programs for more than a quarter-century makes him a perfect fit for this expanded role, the purpose of which is to build a more robust network of support to broaden the diversity of law school candidates.

Kent has devoted his career to the mission of equity in legal education, an area in which he is recognized as one of the country’s foremost authorities. He has been the driving force behind hundreds of collaborations with and among schools, bar organizations, foundations, and other groups and individuals in support of efforts to enhance access and equity across the whole spectrum of legal education, including developing a robust pipeline.

While enormous strides have been made in broadening and diversifying the population entering law school, there is still a huge variance in the opportunities available to students that continues to challenge the legal profession from reaching its full potential and being representative of the society it serves. These inequities start long before the law school admission process, where our member law schools are working hard to open doors widely. We must focus on the entire educational pipeline to make a difference. Those who will be the first in their family to attend college, students from rural areas with limited academic resources, those from economically disadvantaged backgrounds, and anyone who is a member of a historically underrepresented racial or ethnic group are likely to be shortchanged by an educational system that is titled against them starting as early as Pre-K.

We are committed to putting our strength on the side of equality. The quest for greater equity and diversity is LSAC’s origination story. Our purpose, from the beginning over 70 years ago, was to bring greater fairness to law school admission by standardizing and broadening the criteria by which people were admitted to law schools. For instance, our charge was to help make sure that two candidates with equal aptitude for critical thinking—say, a Latina who had attended the state college closest to her home and a white man with an Ivy League pedigree—were treated equally in the admission process. Admission processes without standardized measures of aptitude are far more prone to both conscious and unconscious bias.

Our work is still driven by a commitment to a legal field that reflects the society it serves. LSAC’s Prelaw Undergraduate Scholars programs, for example, reach out to students from racial and ethnic groups that are underrepresented in the legal profession. The work Kent has done through those programs over the years has made the kind of real, tangible difference we need to be making. Thanks to Kent and the many people who make the PLUS programs possible, many students who would not have otherwise even considered the legal field are now succeeding in law school and in the legal field.

As a profession, and as a society, we’ve made progress. But our work is far from complete. The calls for more diversity can be heard from nearly all quarters. The general counsels of some of the country’s largest corporations, for example, recently made it clear to law firms that more diversity among the attorneys handling their legal work isn’t something they want: It’s something they expect. There are a lot of diversity officers at law schools across the country who are passionate about delivering on that expectation. Fortunately for all of us, Kent will be drawing on nearly three decades of experience and insight to create a hub for the initiatives focused on diversity, equity, and inclusion while also nurturing the next generation of leadership for our field. Stay tuned here for more news soon on these exciting directions.

In the meanwhile, congratulations, Kent, and thank you!

Plot Twist: How One Law School Graduate Used Her Degree to Open Doors in Hollywood
How One Student’s Passion for Law Was Amplified by the LSAC PLUS Program
Diversity, Equity, and Inclusion Updates and Resources to Help Candidates Navigate Law School Admission
How LGBTQIA+ Law Students Are Navigating Through COVID-19
How Recent Supreme Court Decisions Affect Legal Education