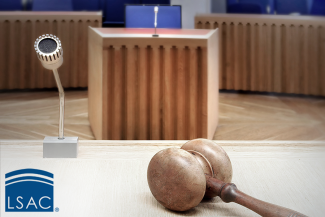 There are many ways to make an impact in law, but one we don’t often hear much about is how people become judges and justices. During a recent LSAC webinar, I was joined by two women who took unique paths in law and are now breaking barriers as members of the judiciary, along with a third pathbreaker who now works to help law school candidates make their own successful transitions to the legal profession.

After Judge Diane Humetewa, of the U.S. District Court for the District of Arizona, earned her undergraduate degree, she worked for four years as a victims’ advocate in the U.S. Attorney’s Office. Through that work, she caught the attention of a number of lawyers, many of whom encouraged her to go to law school and be a voice for victims — she walked into work one day and her supervisor had three packets of law school applications for her to fill out! As a first-generation college graduate, Judge Humetewa had no idea what it meant to go to law school, but she was accepted, setting her on the path to her distinguished career.

Justice G. Helen Whitener, of the Washington State Supreme Court, followed her own unique path into law. An immigrant from Trinidad and Tobago, she had a background in international marketing and later took a job in an accounting firm. One of the other accountants was also a lawyer and asked her if she had ever considered law school. She applied, and the rest is history, she says. “It doesn’t matter how you get in,” she told our audience. “At the end of the day, you have to do the work to continue on.”

We also were joined by Monica Ingram, associate dean of admissions and financial aid at Cornell Law School, whose path to law school was also noteworthy. She always aspired to have a law career, she says, and she always knew she could do it on her own timeline: When her father died when she was young, her mother got her master’s degree, and when Dean Ingram and her sister finished college, their mother went back and got her PhD. Dean Ingram waited nine years before going back for her law degree. “I decided that was the time for me,” she told us.

The panelists offered their advice for people thinking about going to law school. Judge Humetewa noted the abundance of information available online and suggested thinking about where you plan to live. “If you already know, you probably should think about going to law school there,” she said, noting that you can become familiar with classmates, do internships or externships in the area, and build a network that will serve you well after law school. Justice Whitener agreed and also emphasized the importance of support from family, given the personal and financial toll that the rigors of law school can have on students. And Dean Ingram suggested thinking about what you, personally, need from a school, whether it’s a smaller student body, something close to home, a place where you don’t need a car, and so on.

Judge Humetewa and Justice Whitener also told us about their experiences on the bench. Justice Whitener recalled the first time she put on a robe and walked into the courtroom. “The change in people in the courtroom was very evident to me,” she said. “They had not seen a Black female in my county on the bench. I saw Black individuals who were slouched in their seats sit up; I saw white individuals do a double take.” She realized it was important to use herself as an example of the possibilities for others who are underrepresented in the legal profession. She also committed to mentor others as she, herself, had been mentored. “You can, by your own performance, open that door for others — or shut it for others,” she said.

Judge Humetewa’s work is extremely busy, and her division receives a high number of cases because of federal land issues, the nearby international border, and other factors. “One of the things I had to really concentrate on in the early years was time management and organization of how to address all these cases,” she recalled. “I realized fairly early that no matter how you work, your docket never gets any smaller.” She also noted that being a judge can be isolating and that it’s important to have a trustworthy circle of law clerks in the “bubble.”

Dean Ingram suggested that every law student consider pursuing a judicial clerkship. “You may not choose to, but think about it,” she said. “Knowing how court systems operate and the roles the staff plays are invaluable to understanding the legal system, she said.

Our panelists agreed, in closing, that this is the perfect time to join the legal profession. “If you’re in a marginalized group, your voice is definitely needed at this time,” Judge Humetewa said. And as we always say at LSAC, there are so many things a person can do with a law degree. My sincere thanks to Judge Humetewa, Justice Whitener, and Dean Ingram for sharing their insights with our audience. If you missed the discussion, you can view it on our website.

The World Needs More Ruth Bader Ginsburgs
A Bright Legal Journey Emerges from Inside A Dark Room
Access, Activism, and Advocacy: A Call to Action
What Can You Do with a Law Degree?
A Lifelong Learner Embarks on His Legal Education Journey