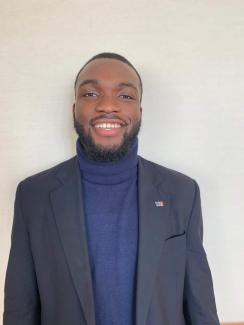 Ryan Odibo says he feels a lot of different pressures to be successful in life and his career. Now a junior at Virginia Tech, Odibo is aiming to be the first in his family to graduate from college. The son of Nigerian immigrants, he comes from a single-parent background and is the oldest of three siblings. “I’ve always felt this obligation and responsibility to take care of my family,” he says. “I want to set myself up to get into the best career possible.”

While he’s currently studying political science at Virginia Tech, Odibo says he’s always felt called to serve people less fortunate than him — and he knows a career in law could give him that opportunity. “I love understanding why people do things,” he says, “and everything is related to politics. But lawyers, when you boil it down, are advocates — the most knowledgeable, upstanding advocates you can have. I know I’m supposed to use my voice to lead people and to change lives. And that is something I never really knew how to tap into until I met people who were just as passionate as me.”

That happened last summer, when Odibo participated in a Prelaw Undergraduate Scholars (PLUS) Program — one of several hosted every summer at law schools around the U.S. via support from LSAC. While these programs were previously held in person, last year, amid the COVID-19 pandemic, LSAC and participating law schools moved the programs online, allowing Odibo and other participants to access them from home.

The goal of the PLUS Programs is to give undergraduate students from historically underrepresented communities an immersive look at law school, the admission process, and what a career in the legal profession might look like. The programs are free to attend, and participants also receive a $1,000 stipend; in addition, LSAC provides laptop computers and internet access to admitted students who need that assistance to participate.

For Odibo, the best part of the program were the diverse guest speakers brought in to discuss their experiences in law. “They were real lawyers coming in and telling their stories,” he says. “Some of them had known they wanted to be a lawyer their whole lives, while others didn’t know [early on] if they wanted to go into the field. Many of them didn’t fall into the classic ‘prelaw student’ image, and that gave me hope.”

The idea of attending law school, or even navigating the application process, can be daunting, especially for first-generation candidates who are unable to rely on family guidance. “I had a lot of impostor syndrome concerning law school,” he says. “I wasn’t even sure if I was qualified to go, but I thought I’d apply to the program and see what happened.” The PLUS Programs aim to alleviate that anxiety, and Odibo says PLUS Online at Akron Law did so for him. “It definitely changed my perspective on the application process, as well as law school in general,” he says.

Odibo says he hopes more people like him will participate in the PLUS Programs and other initiatives designed to increase diversity in law. “African American people are among the most marginalized people in this country,” he notes. “We’ve seen numerous examples of how the system has taken advantage of us. If we’re able to mobilize and educate African Americans in general on the legal system and how it works — and we have lawyers and judges advocating for us — we can create change for generations to come.”

Ultimately, for Odibo, it comes down to finding a way to channel his passion for service into a successful career. “If you’re not using your degree, or advantage, or skill to help others, to aid others, then it’s difficult to find meaning in what you do,” he says. “Anyone who has that feeling, that itch that they need to help people — to stand up for those who can’t stand up for themselves — should look into these programs. They can really spark an interest, and that interest could eventually lead to a life’s work.”

Applications for this summer’s PLUS Online Programs will be closing this month. For more information, including how to apply, please visit the PLUS page of our website.

Why Black Lawyers Matter
University of Akron: The Challenges and Impact of Administering the PLUS Program
PLUS Program Impact: How 78 Lives Were Changed at Duke Law
Why Language Matters for Diversity, Equity, and Inclusion
Explore Law: How Three Schools Took the PLUS Program To the Next Level

A Passion for Advocacy Leads One Student to an LSAC PLUS Program
LSAC Celebrates 10th Global Accessibility Awareness Day
In Memoriam: Celebrating the Legacies of the Colleagues We’ve Lost
How a PLUS Program Renewed One Student’s Passion for Law
LSAC Goes Platinum in Digital Awards Competition