How a PLUS Program Renewed One Student’s Passion for Law 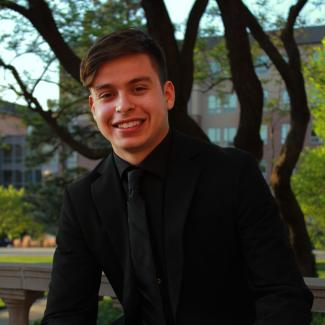 Carlos Cedillo-Silva always pictured himself in a world in which he would be part of the legal profession. Growing up in a predominantly Hispanic, low-income community, he didn’t actually know any lawyers. However, family members would tell him, “You love to argue; you’re going to be a great lawyer someday.” But that inkling turned into an expectation which by the time he enrolled at Washburn University in Topeka, Kansas, had begun to feel like a burden.

But then, a friend from his hometown of Wichita told him about LSAC’s Prelaw Undergraduate Scholars (PLUS) Programs. These programs are hosted every summer by law schools around the U.S. and aim to give undergraduate students from historically underrepresented communities an in-depth look at what law school and the legal profession are really like. That conversation set Cedillo-Silva on a path that transformed his “burden” into a calling. Intrigued, he applied for the summer 2020 PLUS Program at the University of Oregon School of Law.

“I had almost no real-life experience in the legal field,” he says, “and it just seemed like the perfect program for me. I saw it as a great opportunity to find out what law school and the practice of law are like.”

The PLUS Programs are free to attend, and participants also receive a $1,000 stipend. In addition, after last summer’s programs were moved online due to the COVID-19 pandemic, LSAC provided laptop computers and internet access to students who needed that assistance in order to participate. Students who attend the programs are more likely to pursue a law degree and ultimately add their voices to a profession whose effectiveness is largely predicated on its diversity.

While Cedillo-Silva did not have the opportunity “to see beautiful Oregon,” he did get to meet regularly with Oregon Law professors and deans via Zoom while participating in courses on the legal profession, legal writing, and other topics. The program’s breakout rooms allowed him to get to know other participants, and he formed friendships that are still going strong.

“It was very accessible,” he says. “There were definitely benefits to having it online. The time commitment was less, and it made it easier for people to attend from all over the country. We had weekly meetings with teaching assistants and professors, and I could have just talked to them about law forever. It was fantastic.”

Cedillo-Silva says he learned a lot about the growing opportunities in what was once a profession with daunting barriers to entry.

“Historically, law has been very exclusive to get into,” he says. “At one time, you had to be a certain type of person to be able to become a lawyer. But the field is expanding rapidly.”

He appreciated the PLUS Program’s sessions with lawyers from a variety of different backgrounds and practice areas, in particular the emphasis given to the often overlooked need for legal professionals to take care of their own mental health and well-being.

One part of Cedillo-Silva’s concerns about entering law was that he might find it too limiting; however, the PLUS Program showed him that the opposite is true.

“It’s such a broad field,” he says. “Every field needs a lawyer, so you can really do anything.”

Due to the wide variety of practice areas, Cedillo-Silva says he’s keeping his options open, but is curious about environmental and personal injury law, two areas of focus that caught his eye during his participation with the PLUS Program.

Now a college sophomore, he says he will probably take a gap year between graduation and law school to allow plenty of time to figure out his career plans, noting that he emerged from the PLUS Program feeling that a career in law would be a good fit.

“I’ve always been one to seek truth and equality,” he says, “and I have that fiery passion where I want things to be equitable.”

Cedillo-Silva says the PLUS Program showed him how he could advance equality as a lawyer and why it’s important for people like him to enter law.

“A lot of the time, people from disadvantaged or underrepresented communities don’t have access to, or an understanding of, the legal field,” he notes. “They don’t see anyone who looks like them in that field. I think it’s important, especially in a nation that’s about equality for all, that all sorts of groups in these communities have access to the legal field.”

LSAC recently issued a call to law schools interested in submitting proposals to host a PLUS Program in 2022. For more information, please visit https://www.lsac.org/members/lsac-grant-programs/plus.

Let your music play: How to foster a sense of belonging in law school
Raise Your Learning Game for Law School Success
I’m a Proud Veteran Who Celebrates Her Non-Traditional Path to Law School
How the Marshall-Motley Scholars Program Creates Lawyers Fighting for Racial Justice
The Incoming Class of 2021 — The Most Diverse Law School Class in History